The Norris Geyser Basin is the hottest geyser basin in Yellowstone National Park, one of its parts the Back Basin is considered to be more wooded and full of different geothermal features. Some people call this part “the land of extremes”. Tourist will see here the tallest geyser, but at the same time this geyser is infrequent, new and old geysers, springs that have been damaged by people. We encourage you to follow the rules of the park and stay on specially designed trails.

Seismic activity of the region and water fluctuations influence and change features in the basin every day. There is also an interesting fact that most of the waters in the Norris Geyser Basin are acidic, even in geysers.

Enjoy a 1.5-mile boardwalk and dirt trail that takes you around the territory, showing the most popular features of the area. By the way, the basin was named after Philetus W. Norris, the second superintendent of Yellowstone, who provided the first detailed information about the thermal features.

The Vixen Geyser is one of geysers in this basin, but it is known for its temperature that rises up to 195°F, but it’s very hard to predict its eruption intervals. Intervals can last from minutes to hours and its eruption duration can go for seconds to 50 minutes. The height of the stream is also differs from 5 to 30 feet.
Steamboat Geyser, the world’s tallest active geyser, is also can be seen here. It should be said that most of its eruptions are difficult to predict, but its stream rises up to more than 300 feet in the air. The last major eruption occurred on July 31, 2013, and the geyser can go 50 years between major eruptions.
Cistern Spring is a geothermal feature with fabulos and living color. It’s brown, orange and green hues come from collections of algae and bacteria. These species require an environment with varying temperatures, but all are able to thrive at temperatures near, at or above boiling.
The Echinus Geyser is an especially acidic geyser. When the Echinus Geyser erupts, it sprays out a mixture of iron, arsenic, manganese and aluminum, which results in building the rust-colored sinter spines.

Emerald Spring with wonderful green color is twenty-seven feet deep and lined all the way down with sulfur. Its emerald color is a result of a mixture of the yellow sulfur with the pool’s reflected blue.

Minute Geyser is the one that has been damaged by people. It once erupted every 60 seconds 40-50 feet in the air, now its eruptions are irregular. This is the result of peoples’ ignorance: visitors used to throw rocks into Minute Geyser’s larger west vent.

To get to the trailhead:

Drive to the intersection of Grand Loop Road and Norris Canyon Road and go west into the parking area of the Norris Geyser Basin. 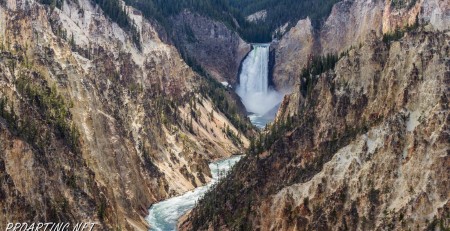 Artist Point on the Grand Canyon of the Yellowstone National Park 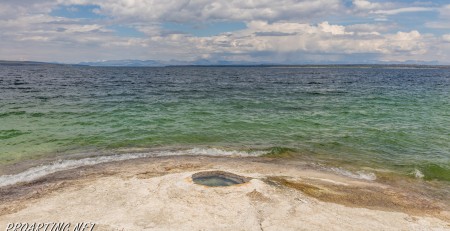 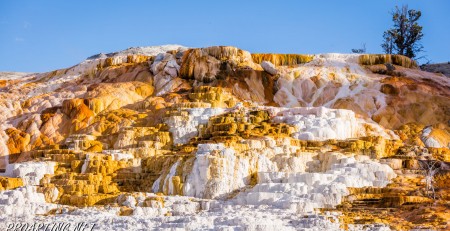 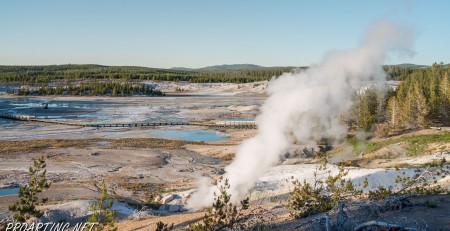 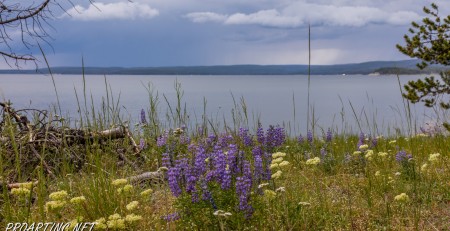