Entering South Rim from the South Entrance you will find yourself at Grand Canyon Village – a tourist center of the South Rim, with a Visitor Center, all the lodges, restaurants, historical points of interest and main transportation junction of the South Rim. If you decide to travel along the rim enjoying the variety of its view points, you have 2 options from the Grand Canyon Village – to go west along a scenic historic Hermit Road, with the end at Hermits Rest, or you may follow a 25 miles Desert View Drive, which is much less-crowded, but also has many fantastic overlooks and pull-outs, allowing the visitors to admire the beauty of the canyon on their way. It will take you to a settlement, called Desert View.

Here, among the other interesting features, you just must visit one of the most impressive architectural merits of the Grand Canyon National Park – Desert View Watchtower, or as it is also called, the Indian Watchtower at Desert View. You will find it at the eastern end of the South Rim, close to the East Entrance to the South Rim.

Except for the magnificent view it provides, the Watchtower is itself an extremely interesting experience for the visitors. The height of the tower is 70 feet, and it has a 30-foot base. It was designed by a well-known designer of the time – Mary Colter. And she created a unique structure. It consisted of a concrete basement and a metal steel framework. Stones were hiding the construction. Colter was also supervising the construction of the tower, personally choosing the stones for the construction, their size and shape. She managed to make a watchtower, looking like an ancient Anasazi watchtower, though it was much larger than any usual Anasazi tower. In 1932 the construction of this four-story tower was finished and the Watchtower was ready to have the first visitors.

It consisted of two parts – a one-storey building connected with the four-storey tower. The first floor area of a one-storey building contained a large circular room which was named a Kiva Room (usually a ceremonial place for some spiritual rituals in a lot of Indian groups). The ceiling of this room consists of the logs, laid in a special pattern, taken again from some Indian structures. There is a fire place in the middle of the room and a ladder, leading up to an opening in the ceiling. This room almost wasn’t changed after the construction, still containing the same ancient heavy wooden furnishing. The rest of the first floor space is used for sales and storage purposes. On the roof of this part of the building, just above the Kiva Room, there is an observation deck, opening fantastic views of the canyon and Painted Desert.

The interior of the Watchtower is simply amazing. The walls are covered by murals, painted by Fred Kabotie. In his paintings he copied some ancient pictographs and petroglyphs, and also described some stories from Hopi mythology, as well as some spiritual ceremonies. Each level of the Watchtower has a circular balcony and several windows, from which on a clear sunny day you may see for over a hundred miles. Narrow staircases lead the visitors up from one level to another. Though built not so long ago, the Desert View Watchtower really looks like an ancient Indian tower inside and outside.

And what a fantastic view it prepares for the visitors! It seems that no description can really prepare a person for the greatness and majesty of this great canyon, stretching into the distance, as far as the eye can see. It feels as though the Grand Canyon looks always differently; the sun and the shadows from the clouds, flying by, make the color tones of the rocks to constantly change in a sophisticated palette from black and purple-brown to pale pink and bluish-gray. Looking at the bottom of the canyon, it’s hard to believe that a tiny muddy creek down there has created this huge gorge. Watching the canyon from the Desert View Watchtower you may admire unbelievable creations of nature: formed from stones different peaks, spirals, temples, huge head and just bizarre forms, each of which can be easily put on the central square of any city as a monument. 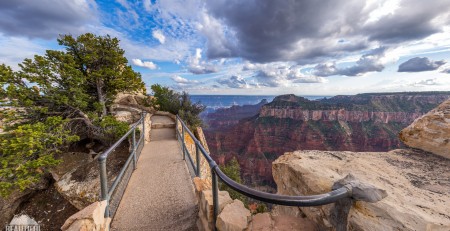 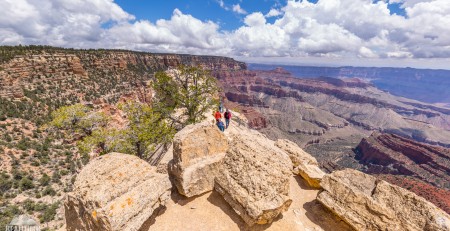 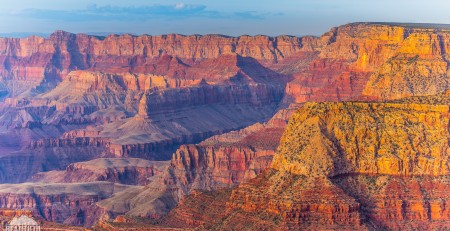 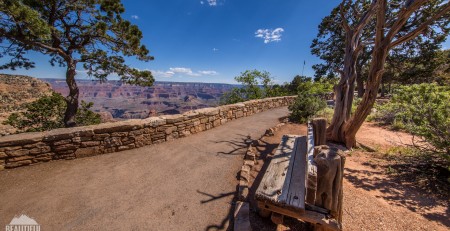 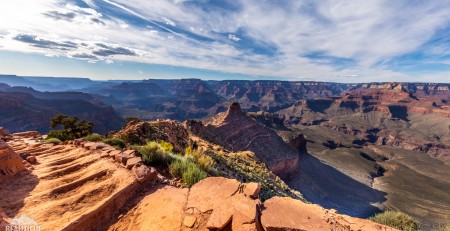