Nowadays it is hard to astonish a person with anything. People are satiated with information and colorful pictures. But Nature is a great architect, its imagination is simply inexhaustible, and every time it is able to delight the eyes of an investigative observer with something which makes you to freezes in awe and admiration. Do not even doubt that one of these unrivaled places on Earth is Zion National Park.

Zion National Park is situated in south-western part of the State of Utah, in the immense desert region, near a small town of Springdale. The park spread over the territory of approximately 146,6 acres and features an amazing collection of rock formations carved mainly from the basic rock – Navajo sandstone. Amazing impression is produced by towering cliffs, solemn boulders and deep canyons, shimmering with all shades from flaming red to pale pink.

Zion National Park was created on the 19th of November, 1919 thus becoming the first national park created in Utah. Meantime this beautiful park welcomes approximately three million visitors annually, attracted by its spectacular canyons, impressive panoramic views, waterfalls, extreme trails, beautiful nature, and wild animals nearby.
The park itself, as it was indicated above, is quite large and is actually subdivided into several sections, some of which are situated quite far away from each other. Nevertheless, every park section may offer the visitors numerous hiking trails of different length and difficulty.

Zion National Park has several parts or sections:
– Zion Canyon or as it is also called – Main Canyon. This is the best-arranged and regulated part of the park, easy to visit as for logistics, and therefore the most crowded area of the park. There is a free shuttle-buses system operating during the peak tourist season here, the visitors can also find here a Visitors Center, Zion Lodge, a museum. The location close to Springdale (a tourist town near the park’s southern boundary), as well as lots of picturesque paved trails that lead to waterfalls, canyons or scenic lookouts, with a wonderful views of the canyon make this part of Zion Park the most attracting to the visitors, and many tourists limit their journey just by attending this area.

– Upper East Canyon. This partition of the park is driven through by all the visitors, traveling to Zion from the side of Bryce Canyon. Route 9, or as it is also called Zion-Mt. Carmel Highway, is actually itself quite a spectacular sightseeing and a very interesting place in Zion National Park. It meanders through the Upper East Canyon area taking the visitors from the Eastern Entrance of the park to the Visitor’s Center and further, on the way opening the beauty of this section of Zion Park with its numerous immense slickrock “domes” and some sandstone formations. Driving through this highway keep your eyes open to enjoy the picturesque landscape, you will also have a chance to see the Checkboard Mesa, the most well-known feature of this section of the park.

But the most popularity this highway gained thanks to two tunnels, built in 1920s, which you pass on your way. One of them is a 1,1 miles long tunnel through solid sandstone , which is deemed to be one of the most spectacular construction projects in Zion Park history. Construction of the tunnel began at the end of 1920s and was finished on July 4, 1930. The tunnel has special windows carved in the rocks, allowing drivers a better view of the canyon lying at the bottom. At the time when it was constructed, it was the longest tunnel of such kind in the whole United States. The goal and the purpose of such an expensive and labor-consuming tunnel construction was to create a direct road to the tourist areas of the Grand Canyon and Bryce Canyon from the territory of Zion National Park. All three parks are located within a radius of approximately 100 miles away from each other. Completed construction of the road Zion-Mt Carmel highway allowed drivers to travel to Bryce Canyon territory through Zion National Park and since then the number of Zion visitors has increased significantly.

But driving through the tunnel you should be careful as it is quite narrow and there are limitations as for the vehicle size (you may check the limitations at the National Park Service website: https://www.nps.gov/zion/planyourvisit/the-zion-mount-carmel-tunnel.htm). It is also forbidden to stop or turn around in the tunnel or at its entrances, in order not to create accident situations.

– Zion Narrows is quite popular route among the tourists who prefer something unusual, extraordinary. It lies in the upper reaches of Zion canyon, where the walls of this immense canyon come close to each other leaving a narrow distance between them of only a few meters. The trail runs along the river most of the way and travelers have to go in the water. People used to explore this “trail” on horseback, but nowadays wading in the water is more popular.

– The Desert Lowlands. This is the most unorganized and uncoordinated part of the park, which can offer the travelers a couple of quite long trail, passing through the open desert. In summer it is too hot here to explore the territory, but the time here can be much more pleasant during the colder season.

– The Kolob Terrace. Those who are eager to have some different experience, who are willing to see the park from a “different angle”, can go to this section of the park. But you will have to pass approximately 40 miles to get from Zion Canyon Visitor Center to the beginning of hiking trails of the Kolob Terrace.

– Kolob Canyon – this is the farthest part of the park regarding the crowded tourist Zion Canyon. Once Kolob Canyon was a totally separate landmark, and was connected with Zion Park in 1956. To get to the local Visitor Center you will have to drive a little bit more than 40 miles from Zion Canyon Visitor Center. But here you will have a chance to explore another canyon through several scenic footpaths.

Zion National Park is an unparalleled place, with unique atmosphere and splendid landscapes. That is why we would recommend it as a “must visit” for the hikers and adventurers, looking for the amazing creation of Nature to explore. 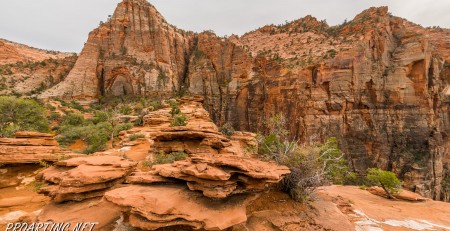 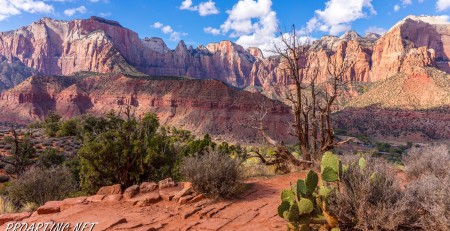 Unforgettable Views of the Watchman Trail 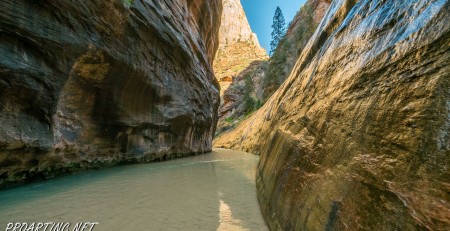 The Narrows – an incredibly unique experience for any hiker! 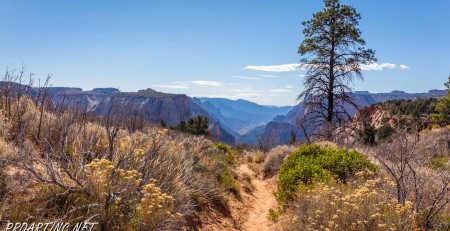 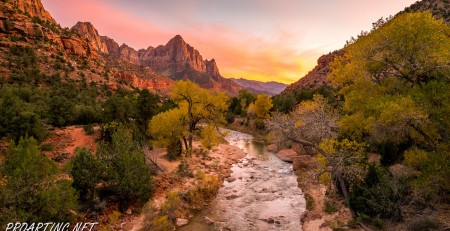 Many thousands of years ago, the Virgin River was making its way to the south, winding in the soft [...]