If you want to enjoy the fullness of beauty and uniqueness of the northern Californian Coast, Sonoma Coast State Park is just the right place for this. Spreading out its land of more than 10,000 acres on the 17 miles of Pacific coastline, this park boasts breathtaking scenery of the majestic ocean and incredible beaches which are quite diverse in their appearance. Here you will see the rugged forelands, steep bluffs, amazing sea-stacks decorating the already beautiful coastal area.

The Willow Creek Section, not so long ago added to this state park, enlivens the flora and fauna of Sonoma Coast State Park. Actually, Sonoma Coast was created in 1934, but for quite a long time had a status of State Beach. And it was only in 2007 that the reclassification happened based on park’s widening boundaries, which led Sonoma Coast State Beach become a State Park instead.

Stretching from the Vista Trail (which is situated about four miles northwards of the closest town – Jenner) up to Bodega Head on the south, Sonoma Coast State Park has a huge convenience or even pre-eminence. And this is the Coast Highway or Hwy 1, running along the whole territory of this state park and firstly – providing the visitors with an incredibly scenic drive, and secondly – making the access to all the park areas very easy. There are quite many pull-offs where you may stop to capture the precious moments of your trip on a photo, as well as roads and trails allowing the access to the beaches.

Among the activities offered by Sonoma Coast State Park are the following:
• hiking (among the most popular hiking trails are the Vista Trail (the northernmost trail of the park), the Kortum Trail, which is the longest at the park, running along the coastline, and the Pomo Canyon Trail, giving the hikers an opportunity to explore the inland territories of the park);
• marine animals watching;
• fishing;
• horseback riding on a beach;
• beachcombing;
• surfing and scuba diving;
• tide pooling;
• camping (actually there are 4 campgrounds available at the park – Bodega Dunes Campground, which is the most developed with lots of amenities, Wright’s Beach Campground, and two primitive campgrounds – Willow Creek and Pomo Canyon Campgrounds, which are also called environmental camps);
• picnicking;
• rock climbing;
• boating.

As it is clearly stated at the park’s website, though consisting of numerous beaches, Sonoma Coast State Park is not designated for swimming. Unfortunately, the park is also not dog-friendly – leashed dogs are allowed only on parking lots and in Bodega Dunes and Wright’s Beach Campgrounds.

Planning your trip to Sonoma Coast State Park try to place the priorities what you would like to see here, as soaking in the enchanting and sublime beauty of this place you may not notice how fast the time flies… Staying in one of the park’s campgrounds will give you a chance to experience a fabulous spectacle, one of the most magnificent sights in your life – the sun setting down the ocean line. 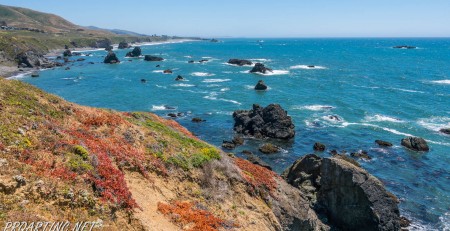 Kortum Trail – enjoy the beauty of the Pacific Coastline